johnny has evolved a dynamic body of curatorial work which engages with LGBTQIA+ narratives and unconventional bodies of public art research to reveal structures that bind power, identity and resistance. Often spanning several continents and years, these projects comprise re-interpretations of given social organisation methodologies and histories that examine the existence of capitalist forces at work in gendered social performance. An ongoing focus of their curatorial work is to research the relationship between social technologies and gender performativity to understand the potential futures of publicness in a platformed capitalist world. 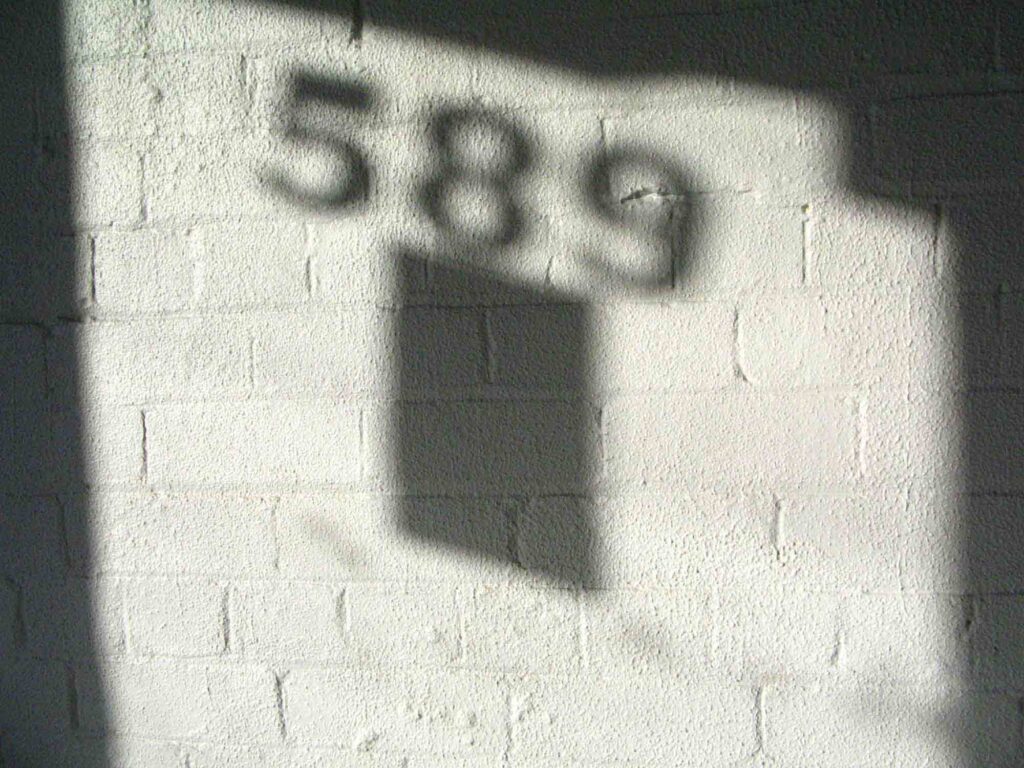 At the heart of ‘589 Plateaus’ was the concept that it is should be coordinated rhizomatically. It can described by quoting Foucault when he said that “acting is an art of living and thinking”. Lee Ingleton and johnny pavlatos formulated 589 Plateaus to sustain a real critical practical philosophy that proposed everyday revolutionary practice as an intensifier of thought. A public socially engaged art think tank. That is to say that it functions constantly on a multitude of critical levels. Their effort was in constant development and the plateaus that formed stemmed from hard work and creative practice. They wanted ‘589’ to build on radical concept[s] and that they should germinate to feed the revolutionary creative productive desire ~ which in turn should feed the artists expression in the everyday world as a desire to broaden ones meliue and spread the message further and beyond.

Conceptually 589 Plateaus’ emerged from a strict diet of deterritorialization and deconstruction of the structure of the A.R.I. (an A.R.I is an Artist Run Initiative ). They were aware of the cult like frameworks of this but at the same time were deeply critical of the institution of contemporary art and public art practice and its cult like status and frameworks. If there was an algorythmn that could symbolise this arrangement, it may look something like this;

The hermeneutics of this equation mean rhizomatic practice opens to multiple possibilties. It means that art making remains open to the reflections and the requirements of the artists and curators themselves to be able to engage and interpret the site through their own needs, gender identities, there own publicness, and to realize a multitude of specificities in their practices. Lee and Johnny discussed many varied possible practical requirements that would aid in realising the concept of ‘ a revolutionary practice’? They took some time and listened to each others ideas about the space. They considered the possibiliities of how to break down the artist audience barrier. For example, one consideration was to give 589 PLATEAUS 24 hour viewing availability as a commercial shop window would. They discussed how would this be any different to lets say the window display’s of other galleries such as The Gertrude Art space or The Dolls House? After many lengthy discussions, alcohol, texts, music, noise, and in consultation with their highly actualised cats, Lilly and Gingy, they accepted that difference was important, so with this in mind ‘589 Plateaus’ should develop rhizomatically with the artists and art works. They agreed upon the 24 hour public presentation window concept and discussed that this capability would allow for the development of the concept of the ongoing ‘everyday’ practice, a relationship forged daily with the passersby, that should, in a marc auge – non place way, begin to call a ‘non audience’. To realize the queer deleuzian non place concept, they searched to rent a commercial space on a major road where the public would pass by on a daily basis. they eventually found one; it was at 589 High st on a dead strip of an area of melbourne that had not yet been gentrified – northcote.  It became Plateau Number 589. They activated the concept of 24 hour access by constructing the performance / creative space at the front of the shop, accessible to the public 24/7 via a large double window facing directly onto High st. The aim was to deliver, develop, administer, curate, and present a 24 hour fully functioning  Public Art Space to the public for at least a year. ‘589’ Plateaus aimed to function on the surface as an A.R.I., but with the explicit difference as to not accept any financial support from private or government agencies. Its self regulating autonomy meant that artists were also not charged fees. To the public there was not any real apparent difference to this ARI space, apart from perhaps that the art works remained on display 24/7. The interest in this specificity was not only to critique the institution of public and private art and its organized capitalist space, but moreover to queer the specificity of everdayness and the signifiers of the larger capitalist heirachies. What was also interesting about the rhizomic strategy of 589 Plateaus was that both the site and the work co-determine each other’s significance. The nature of a site specific work in a shop on the High st [for example] takes on a the strange hardwired organizational and institutional habits that passerbys have when focussed upon shopping and gazing into windows. This specific publicness was transformed by 589 Plateaus. Comparatively it can be described as a similar alchemy to when a an amazing book is digested and it’s akin to reading critical theory or philosophy.

Audience and art positions where flipped and within the exchange of art and audience, the viewer was forced to reconsider the site the space and the situation from a different context, it really was the process of deterritorialization. What happened was a beautiful schizophrenic moment, the audience and art become actualised in the revolutionary moment itself. Sound, Video, Social Sculptures, Painterly works all became immeshed with the everyday reterritorialised world of >> shopping. The public who would perhaps not enter into an ARI space because of the galleries institutional snobbery, watched listened and commented upon the artwork[s] on the windows and in their everyday journeys.

Below are some of the passer-by’s documented comments;

– On the structure – ‘I think its art and the artists live upstairs, ‘they change the artwork every month’, ‘It’s an art space within a shop;

-On the content ‘I think is says a lot about the media’. ‘Its about us!’

While they watched and listened we watched and listened. It was a paradoxical return of the public’s own publicness. The public was particularized as they paused for a moment in time to deconstruct and determine a strange shop window in a reterritorialised shop space.

the public were reterritorialised by the artists and art works. A orchid and wasp story of publicness on the High st. 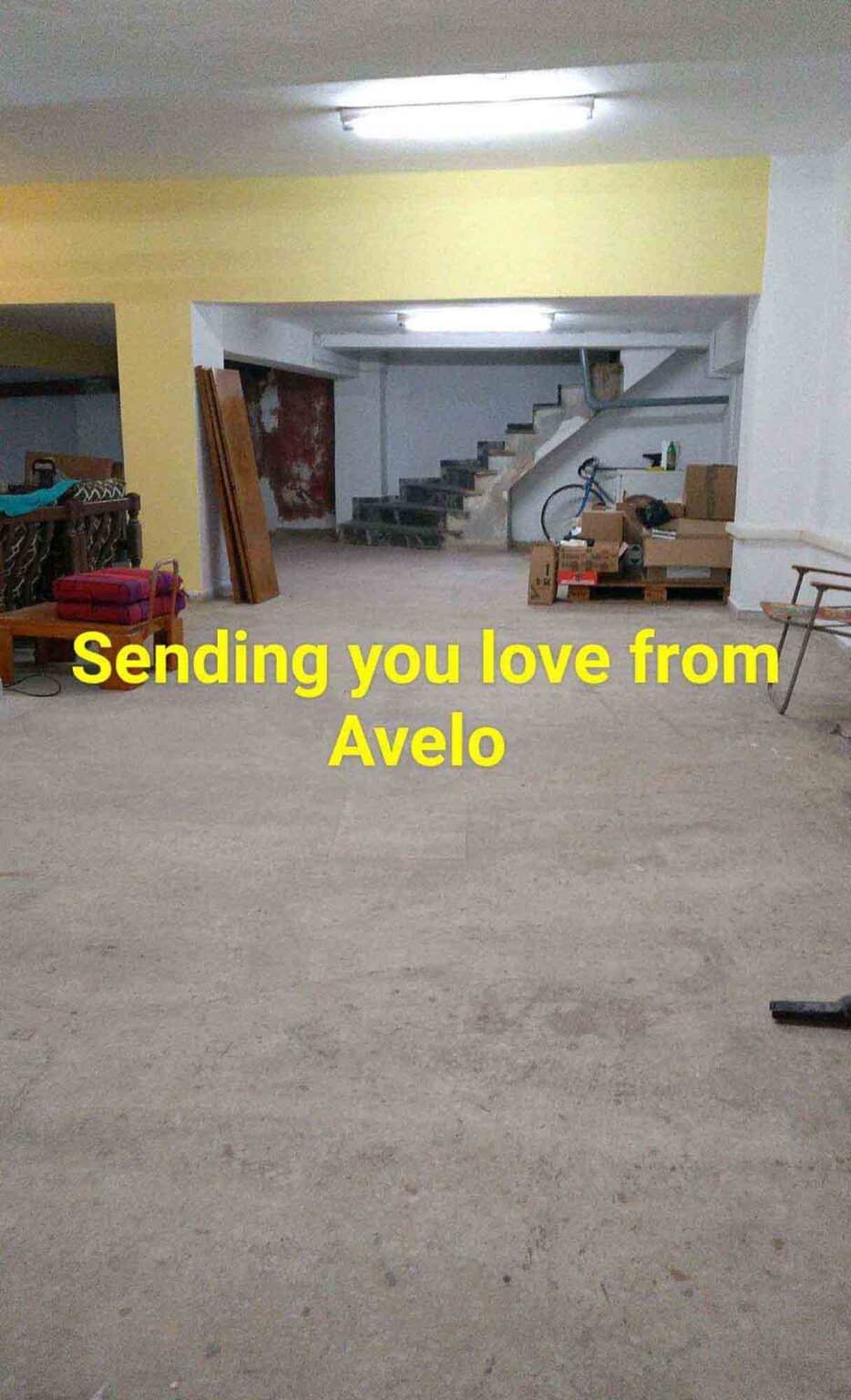 AveloSpace is an art makerspace in downtown Athens, Greece, a creative space for research in art and sound and for experimenting and making a better world. we began working on this space collectively in 2017, after a long period working at AMOQA. Johnny, Lee and friends began by cleaning out the cobwebs, re-plastering walls, laying new electrics, plumbing and painting. Since 2017 they have worked as a collective on different projects and workshops, holding meetings, learning Greek, playing music and games and hanging out. Avelo space includes a small feminist/LGBTQIA+/ critical race library, screening area, sound studios, painting and stenciling workshop and a kitchen.

with AveloSpace Lee and Johnny felt it was important to foster positive creative experiences, and at the same time, experiment with critical social forms to find sustainable ways to bring the margins closer, together and keep us alive. Keeping busy by making a shared imaginary that  is carefully developed to make ‘real’. Avelo is a non-competitive, conceptual, creative platform, in both an analogue and digital sense. Avelo  aims to reconsider and critique ideas of value through shared production and searches for better processes to redistribute the resources needed to sustain queer creative living.

As a queer-feminist radical space, Avelo’s guiding principles align with criticality, solidarity and struggle in collective work. It  is a socially engaged project founded upon collective processes that intervene in socio-normative structures for the creation of alternative social spaces and relations: anti-capitalist, non-hierarchical, queerfeminist, antiracist, no prisons, no borders.

The backgrounds of Avelos collective were varied, we had different skills and brought a wide range of experiences to our working commitments together. They were activists, artists, academics, students, cooks, hairdressers, teachers, graphic designers, law graduates, translators and journalists. Between them they spoke nine languages, Arabic, Farsi, Kurdish, Russian, French, German, Spanish, Greek and English. They had expertise in International and European protections of human rights, sociocultural studies of migration and gender, social policy, queer-feminist & anti-racist cultures, critical pedagogies, theater studies and LGBTQIA+ refugees and EU law.  Avelo 2.0 is coming soon.

AMOQA describes itself as a hybrid space for the research and promotion of arts and studies on sexuality and gender. I joined the curatorial and working team at AMOQA in the summer of 2017 after being introduced to the members through friends at Documenta14.  AMOQA hosts special nights and festivals of performance, screenings of documentaries on gender politics, as well as experimental queer films, technology workshops, lectures on gender topics, queer music gigs and more. At the same time, it has initiated the building of an LGBTQI+ archive, bringing together collections, artworks, zines, interviews, films, photography etc, in an attempt to trace a cartography of greek LGBTQI+ movements. AMOQA would like to act as a meeting point for the networking of researchers and artists that work on body politics, aiming at the creation of new projects as well as the exchange of ideas and thoughts. AMOQA functions as well as a safe platform where different activist feminist queer groups use for their meetings and events. 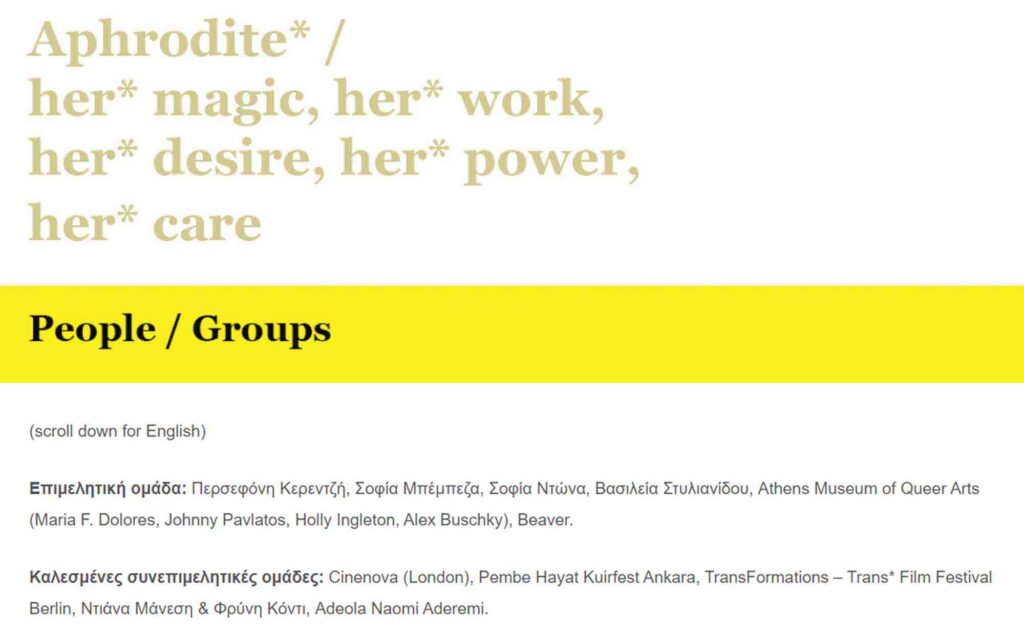 Within the context of a growing conservatism in Greek society, that places each aspect of diversity (gender, race, sexuality etc.) at the margins, the Aphrodite* polyphonic project acquires an obvious impact and urgency. The Aphrodite* project, included film screenings, workshops and discussions, seeks to reinforce the action and visibility of queer feminist practices and collectives, in order to strengthen their voices against the culture of sexism and social racism.

In detail, the films by the Pembe Hayat Queer Festival in Ankara, the Cinenova feminist collection in London and the Trans*Formations Festival in Berlin, organized by trans People of Color* and other gender non-conforming people, provoke us to discuss anti-racism and post-colonialism, desire and sexuality, along with art and activist practices of queer feminist groups.The workshops Gender Panic Inc Queer MagiK Sigil, introduced by the Gender Panic Collective, and Visibly Invisible by Adeola Naomi Aderemi, founder of Distinguished Diva, focus on performative practices of care and queer magic symbolism. The feminine group Political Fatties discusses fatness as an embodied experience as well as a political identity, while the Queer(s’) Talk(s) workshop

approaches the poetics of (queer) language(s) and the relationship between language, affect and trans* bodies. The Slut Pride workshop critiques the culture of sexism and proposes transformative justice for processing ways of caring, self-defence and female* empowerment. Finally, the workshop Gender troubles in (art) education contests the dominant reproduction of gender stereotypes within the institutional structures of art education and explores the experiences and resistances of queer feminist creative subjects. Last but not least, the Queering Psychoanalysis group (QP) discusses issues related to the politics of gender and social perceptions in an attempt to re-evaluate psychoanalytic theory in order to make it relevant for the queer community.

(*) According to gender theory the asterisk implies the inclusion of all gender identities.