I first got involved with the Her Noise Project and Archive in 2010. This happened through an internship where I was tasked to catalogue the project and facilitate its donation from Electra, a small arts organisation in London, to the University of the Arts London, under the auspices of CRiSAP.

What initially drew me to this archive was that my previous educational experiences in sonic arts and experimental musics, not only almost exclusively drew upon curriculum dominated by white Euro/American men, but also was one in which I experienced sexism and bias on a daily basis (racism and trans/homophobia were not even terms that could even begin to be addressed in my academic experiences in early 2000’s in the UK). In cataloguing the project and archive it became apparent that many of the audiovisual artefacts were in a state of disrepair, so I offered also to repair, restore, re-edit and digitise a lot of the material. I did this for two reasons, one selfishly, I wanted to access the material within and two, I thought it important that others should also be able to access the sonic lives and worlds of the people who made up both this project and archive.

In early discussions about Her Noise, as I understood it, the original curators were worn out by the demands of the project, which actually took five years to produce and by the time I got involved, had demanded another five years of unfunded upkeep. The production and maintenance of the project had seemingly demanded a lot from the lives of the curators, as all work that seeks to challenge a status quo does.

In working between Electra and CRiSAP, my understanding, gleaned from numerous conversations and meetings, was that this archive was never meant to represent a definitive history of women in sound, but rather it offered a starting point and would continue to grow, to be added to, to be a living archive. Whilst this still seemed to be a common agreement, I was tasked with creating new interviews and in collaboration with members of CRiSAP and Electra, I built www.hernoise.org.

An exhibition titled Slow Runner: Her Noise Archive II was held in Karlsruhe, Germany, the Her Noise: Feminisms and the Sonic symposium took place at London’s Tate Modern and the Vocal Folds Symposium, inspired by the Her Noise Archive, took place in Oslo, Norway. We also began using the archive as a teaching resource. We were all doing a lot of work off the back of this project, in my case often as a labour of love, to try to animate discussions about gender and sound within our orbits.

I was aware of the whiteness of the project, even though one of its main curators, similarly to myself, comes from a mixed background. One of the early ways I hoped to address this was to try to set up a meeting between the Lambeth Women’s Project, who also had an archive of artefacts in which there was a lot of crossover with the Her Noise Project, and Electra and CRiSAP. Sadly, this generous offer to really expand the archive, to enact the late Stuart Hall’s expansive definition of a living archive, was turned down. I regret this missed opportunity to have been able to open the space to also be able to have more intersectional discussions about gender and race that this opportunity would have provided in the institution.

Again though, perhaps it was selfish, it was what I needed at the time, trying to complete a PhD in which I was grappling with issues of racism and racialisation in a completely white desert. These were conversations I needed to have but which just were not available in any meaningful way within the confines of the universities in which I worked. What I received, and what is so common on touching on race in spaces structured by whiteness, was silence, from academic departments who’s raison d’être is listening and sound. 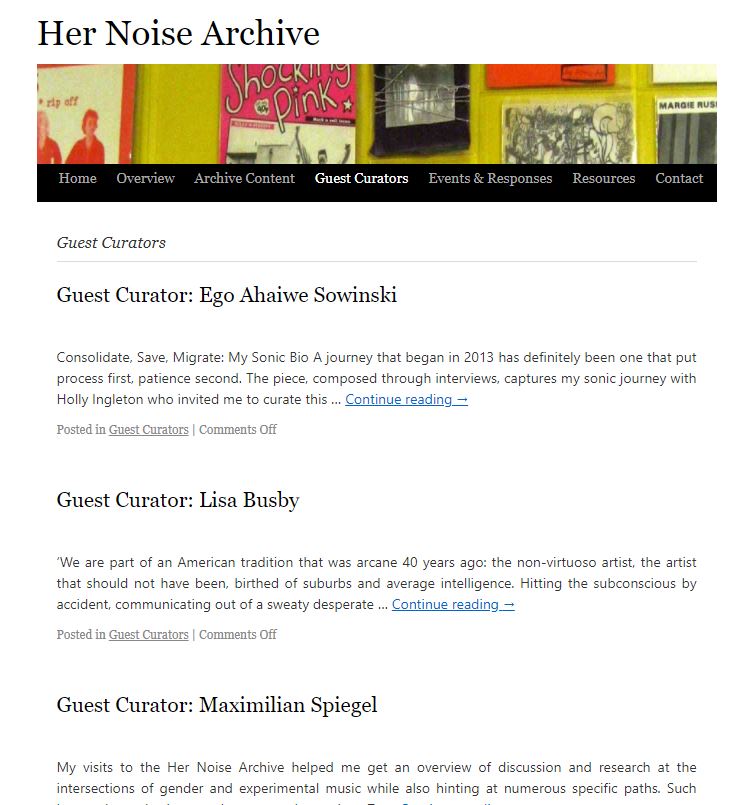 Hernoise.org lasted for ten years. One way in which we initially sought to activate the archive was to invite guest curators to respond to the archive and to select:

Consolidate, Save, Migrate: My Sonic Bio

A journey that began in 2013 has definitely been one that put process first, patience second. The piece, composed through interviews, captures my sonic journey with Lee Ingleton who invited me to curate this piece and gave me space to think and reflect as well as the tools to create by teaching me the basics in Pro Tools, which has been empowering, a part of the journey I had not foreseen. 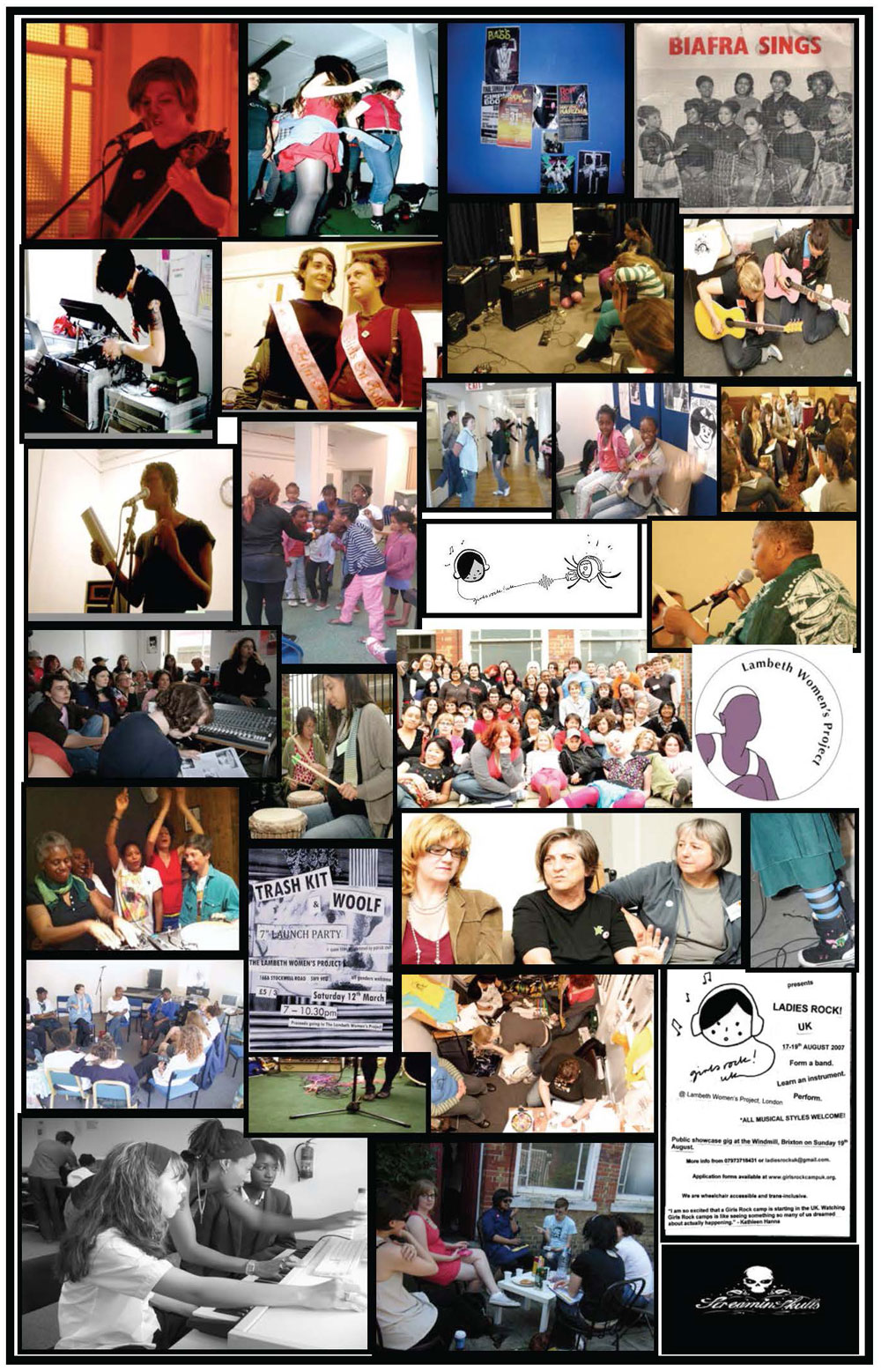 This podcast is based around a series of interviews with the following:

•Ain Bailey, who has often supported me, whether it be helping me to realise the jingle in my head (recorded in the first floor toilet of The Lambeth Women’s Project) based on my love for Kenny Everett, for the Jo Spence Radio project as part of art group X Marks the Spot, or record the ‘pot banging’ in Windrush Square for the Save the Lambeth Women’s Project campaign.

•Cay Castegnetto, who is one of the first people I ever explored music with beyond listening to it, and someone that I have watched in bands like Sonora.

•Aurora Dawn Ellis, we used to work together, DJ together, has been the person that pushed me that step further with a ‘Yes you can’ attitude at every step of the way and has taken me around the UK singing backing vocals in our band the Screaming Skulls as well as touring with Alabama 3 doing merchandise/production and being able to live to tell the tale. Or creating the soundtrack for the short film The Journey of The Bronze Woman, Monument of Love – The Installation (2009).

•Em Fitzgerald showed me how easy it was to begin a band (you basically get on with it) should have been included but the day I was supposed to interview her, the sun was shining so drinking in the sun literally took priority.

The piece also includes my nine-year-old self, as well as a recording of my mother from 1968. I was also encouraged and inspired by Professor Sonia Boyce’s Inaugural Lecture at Middlesex University, Collapsing the boundaries between art, sound and collaboration, where she challenged those in attendance to get creative and which coincided with me thinking or being invited to curate this piece for the Her Noise Archive blog. Another starting point was the Jeanette Bastian Sir Hilary Jenkinson Lecture at UCL’s Department of Information Studies. At the time it made sense to create a sound piece, though I didn’t yet have the ‘skills’. So I created my own brief: challenge myself, learn skills and take on the spirit of HerNoise. So I did, however I would never have imagined that the journey would take me on a voyage. I decided to get personal and explore relationships that I had with others in regards to sound and music. I wanted to somehow acknowledge its presence and the role it plays in my life, whether through projects like Ladies Rock!, Girls Rock! UK, or dancing, DJ-ing, recording events/talks, or simply enjoying it all with my family and friends, I had the desire to bring it all together. Audio continues to play a role in the way that I work. In recent years it’s been a way to evidence and capture, reflect and or remember, or a way to deliver.

Ego Ahaiwe Sowinski is a London based artist, designer and archivist. Her research focuses on Archival Therapy, a practice that incorporates the creative use of archives and their therapeutic impact on marginalised communities. Through this practice communities are able to develop their voice in a way that is rehabilitative and empowering. Her research also centres on Black British feminism/activism during the periods 1970 – to date.

She has just finished an arts residency at the Womens Art Library, Goldsmiths with art group X Marks the Spot, cataloguing and exploring the Women of Colour Index collection, which charts the emergence of Black Women’s art in the UK during the ‘Critical Decades’ of the 1980s and 1990s. The collection comprises ephemera, press cuttings, exhibition catalogues and slides of individual artworks and installations.

Ego is currently working on the archives of artist and archivist Rita Keegan and photographer Charlie Phillips.